While searching for Halloween costumes for my kidlets, my son set it in stone that he wants to be the “Black Power Ranger”. My 3 year old daughter wanted to be every fairy, princess, cutesy bug, etc that she seen. She’s been a fairy, a butterfly + a kitty cat. I wanted something different; OK, something that wasn’t so pink!

We came across a selection of witches costumes for kids. I thought that it would be a great idea, specially when she pointed out the Lil Candy Corn Witch Costume. When we received this one in the mail, the expression on her face was priceless. 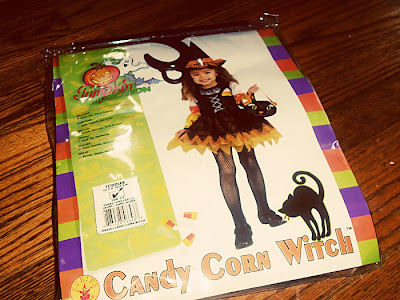 The packaging looks just as it did on the website. Once opened, the first thing that I noticed was the difference in the sizing of the Black Cat Bag. In the picture of the website + the packaging, the bag included looks like it would be larger (at least the handle should have been longer). However, the costume material was made strongly; the colors were bright, as they should be. The costume it’s self and the hat fit as they should. The last one in stock was a size “2T-4T”. She is a 4T + it’s a slight bit snug, but will still work for Halloween. I tend to purchase the kidlets costumes one size larger so they can use them for dress up throughout the rest of the year, but this one will probably have to be handed down to another little girl in the neighborhood after the Halloween fun is over. Overall, this costume was a plus. It’s definitely a possibility that I’ll head back over to the Costume Super Center to order that Black Power Ranger costume for my little man.

Disclaimer: Costume Super Center provided me with a free product in exchange for my honest opinion. 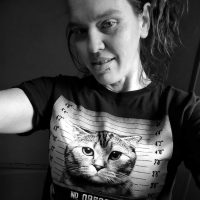